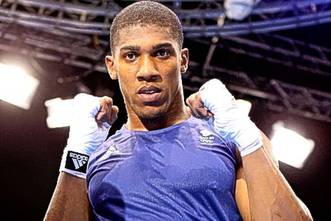 October 5th 2013 was an historic day in the Heavyweight division. Not only was it the date for the most recent Heavyweight title clash between Wladimir Klitschko and Alexander Povetkin but was also a night where an another Olympic Gold medal winner began his journey.

That man was Britain's Anthony Joshua, a man many knowledgeable boxing people are tipping as a future world champion, a champion who could follow in the footsteps of Klitschko by going from Olympic success to major professional success.

Unlike most in the sport Joshua didn't lace up the gloves until his late teens, in fact he was 18 when he first took up the sport in 2007. Despite his late start in the sport he was a natural winning the 2010 ABA Championships in just his 18th amateur contest.

Although still inexperienced at that point Joshua was offered a £50,000 signing on fee following his ABA success, an offer he turned down in the pursuit of medals.

It wasn't long until Joshua's decision to turn down the large cash sum began to make sense with him claiming the World Amateur Championship Silver medal alongside a British title and a second ABA title the in 2011. By now his value was suddenly increasing. The £50,000 offered in 2010 would likely have come with an extra "0" attached to it had he been offered something similar in 2011.

The fact Joshua had done so well in the 2011 World Amateur Champions, beating Italian legend Roberto Cammarelle on route to his medal, had secured his place at the 2012 Olympics in his native London. The chance to go from "amateur boxer, known by boxing fans" to "amateur boxer, known by everybody" isn't something that many have the chance to do, but that was what Joshua could do.

Seen as one of the favourites at the Olympics Joshua would do what he needed to defeat Erislandy Savon of Cuba in a bout that is still disputed to this day to the hard fought nature of both men. Following the victory over Savon, Joshua would defeat China's Zhilei Zhang, Kazakhstan's Ivan Dychko an then cover old ground with a narrow victory over Cammarelle. The decision's may not all have been clear cut but they all went his way as he walked to an Olympic Gold medal.

Joshua, with medals around his neck deliberated on his next step. Was there anything left to accomplish in the amateur ranks? Was the new formed "WSB" for him? Or was it finally time to fight for pay?

The decision seemed to take a while to come to though eventually Joshua signed on the dotted line with Eddie Hearn and Matchroom Sports. It was under the Matchroom banner, and live on Sky Sports, that Joshua's professional career kicked off with him stopping Italian Emanuele Leo inside a round.

On paper the result over Leo was great, Leo entered as an unbeaten opponent, though in reality it wasn't anything special with Leo looking every bit the blown up Italian Cruiserweight that some had him marked down. Though of course at the end of the day it was the win that counted.

Joshua returned to the ring just weeks after the victory over Leo as he defeated British journeyman Paul Butlin. Although on paper Butlin should have been a good test the journeyman simply couldn't cope with the the hand speed of Joshua who looked like he's improving drastically between fights. This time he looked fluid, powerful and like the prospects that Sky TV were trying to make him out to be.

Since the victory over Butlin, Joshua has stopped Hrvoje Kisicek and Dorian Darch, both in bouts that resembled mismatches due to the physical traits of Joshua

It's expected that Joshua will return to the ring again in the coming weeks and may well fit in 4, if not 5 more bouts before the year is out as he journey starts on a quick upwards slope. Hopefully he'll meet some of the other top emerging British Heavyweights on his way there.
Powered by